II worked on Performance magazine for a few years, first as a designer and later as the art director. It was the internal magazine aimed at employees. The issue above was one of the special “annual reports” created each year. This edition incorporated a cooking theme to share corporate results and a look back at some of the major events affecting the company.

Performance was published 8 times per year in English and French. 70,000 copies were printed and distributed by mail (of course).

In any typical issue, I would be involved in all “lineup” meetings where the subject of each article, its length and general ideas for creative sre discussed. After the lineup meeting I would begin to plan out the publication working story by story to determine the illustrations, photographs and other content that would be needed to complete the artwork. In addition to supervising the production of freelance contributors, I would also help to monitor the production process and warn the team of delays etc. I was responsible for final quality control: obtaining sign-offs of printer’s proofs and on-press approvals.

On the right are covers of some of the issues I worked on. 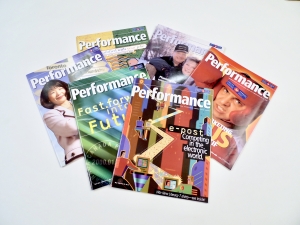